I've had a very odd January. In fact, ideally, I'd like to go back and start again if possible. Although, when I say 'start again', obviously I don't mean 'have the same 3 weeks as I've just had'. No, the reason for wanting to start again is to try to achieve a somewhat different January from the one I've had.

Don't get me wrong, it hasn't been awful or dreadful or traumatising. It's just been a bit, well... bleurgh. Is that a word? The red underliney thing doesn't seem to think so. Although it doesn't seem to think underliney is a word either, so I don't know that I shall trust it. Anyway, bleurgh it has indeed been. (It's definitely a word now. I've used it twice. How exciting - my first ever blog post and I've invented a new word.)

It all started so well. After a splendidly lazy New Year's Day, I sprang back into action on January 2nd. (Hmm, at this point honesty requires me to confess that it was more of a stumble than a spring. Nevertheless, January 2nd dawned and was embarked upon). I caught up with numerous emails, I planned lots of meetings, I wrote some talks. I was on fire! I had decided to embark upon a bit of a fitness regime, which was long overdue, so I went shopping for healthy food and actually did some real, proper exercise. What a day it was. This was my New Start.

And then on January 3rd there was a fairly large hiccup. I began to feel really quite ill. I had caught some kind of coldy/fluey/sicky thing from my friend. This was definitely not part of the plan. I soldiered on for a while, then it got worse as I lost my voice, and worse again as I developed conjunctivitis. I managed to still do bits and pieces of work but there was a serious time delay between my brain and anything else.

Then, about two and a half weeks later, just as I was beginning to feel human again, it began to snow. I do NOT like snow. That is to say, I like snow in its place, which is, for instance, Finland. I can just about cope with snow if I'm on holiday in a log cabin with a warm fire, a huge amount of chocolate and wine, and nowhere to be for a month. But here in Everton, the very highest point in Liverpool, with a practically sheer drop from the back of my house to the Mersey, snow is not welcome at all. So for the last few days I have been sliding around the streets of Everton in my trusty snow boots, attacking the church path with grit, shovel & broom, praying for it all to end soon!

Today has been something of a breakthrough! I bravely ventured out in my car for the first time. Go me! I had coffee with a friend, who helped me set up this blog. A new start! On Monday I re-embarked on the healthy campaign. And believe me I have the achey legs to prove it (the red underliner doesn't like achey either, but they are achey, so there.)

So I'm hoping that, in the absence of a button to press which will allow me a restarted January, things will simply improve from here on in. The signs are good so far. I'm glad that even though it isn't possible to turn the clock back, it's always possible to start over again... 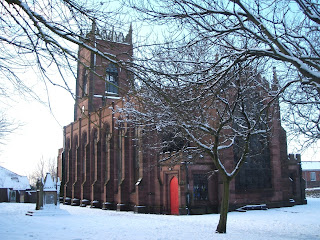