I've spent the evening leading a 'marriage preparation' class for the couples who are getting married here in church this year. We even had a couple join us who are getting married abroad but phoned to ask if they could come because "we've heard about marriage preparation and it seems like a good idea." We had a great evening. I really enjoy the privilege of walking alongside people as they prepare for marriage. I love hearing their stories and finding out where they met, how they knew this was 'the one', why they decided to get married, why they choose to do so in church. I love the fact that, when they aren't Christians but have chosen to marry in church, I have a brilliant way in to talking to them about God's love for us, and his plan for our lives. I really enjoy taking wedding services too. They're pretty scary at first as there's so much to remember and get right, but it's amazing to be part of such a special and joyful day for people. I've had some pretty hilarious things happen at weddings I've been taking. Discretion prevents me from sharing them here, but believe me, even after just 8 years of being ordained, I could write a book...

It's interesting for me to reflect on this side of my ministry at the moment. I'm approaching my 35th birthday (you may feel free to post comments indicating that I don't look a day over 27...). I am currently, and always have been, single. I have just written a book on singleness (due to be published in June. More details about the book itself will come soon...). This is really not how I thought my life would pan out! If you'd asked me at any point during my childhood or even early adulthood, I definitely would have said that I expected to be married with kids by now. And believe me, I had my wedding all planned out! To be honest, it would have been a bit awkward if I'd got to the point of actually getting engaged, since any potential fiancé would have had a fairly limited role in the wedding planning process. There were very few aspects on which I would have required his input...!

So, as someone who is currently single but always thought I would (and would very much have liked to) have been married by now, how does it feel to talk about marriage a fair bit of the time? Well, it's OK! I really believe in marriage. I think it's a fabulous, beautiful, God-ordained thing. I have loved celebrating with so many friends at their weddings over the years. I've been a bridesmaid twice - once as a child (very exciting, but to be honest I'm still getting over the mental scars of the peach shoes and scary white hat); and once as an adult (fabulous dress - good call R&S!). I've led prayers and done Bible readings at friends' weddings, and, as you might expect, on several occasions I've been wheeled out to say grace at the reception, in a 'rent-a-vicar' kind of way (which I've been more than happy to do!).

I love the part of my job that allows me to be involved with everything that surrounds weddings and marriages. It's a joy to plan, pray and prepare with a couple for many months and then stand at the front of church as they walk up the aisle as two single people and walk down it again joined together in some mysterious and incredible way.

Of course, there is a part of me that feels - if not 'sad' as such, then perhaps 'wistful' at weddings, both those I attend in a social capacity and those in a work capacity. 'My' wedding sometimes plays through my mind as I watch theirs. I know that for some single people going to others' weddings is a really hard thing, as it reminds them of how much they would like one - not to mention the fact that a wedding reception is one of the places you're most likely to feel like a complete spare part if you're not with a group! I know that for some single church leaders taking weddings is a hugely painful and difficult part of the job.

I know that I'm fortunate that I don't feel that way. I want to enjoy weddings for the wonderful occasions that they are, and for all the future hope and promise and joy which is contained within them. I hope that, whatever happens in my life, I'll always be able to "rejoice with those who rejoice and mourn with those who mourn", as St. Paul urges the Romans to do in his letter to them in the Bible.

I guess what I really want is to be completely 'me' - the person I am, "fearfully and wonderfully made" in God's image, whole and complete as I am. That way, whether married or single, whether rejoicing or mourning, in good times and in bad, I will still be 'whole'.

The title of my book is 'Single Minded'. More on why I chose that title another time. But the subtitle is 'Being single, whole and living life to the full'. Wholeness is what I believe God wants for me in my life, and for you in yours. John Ortberg has written a book called 'The me I want to be - becoming God's best version of you.' That's my prayer for my life. 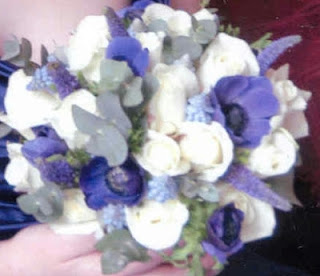