So, I've written a book!

Yes, apparently it's true. Apparently I really have written a book. I find this fairly astonishing. I actually have very little idea as to how it happened. In fact I wouldn't believe it all if it wasn't for the fact that I have a shiny book jacket with my name on sitting on my desk, and a quick online search reveals that something claiming to have been written by me is now available for pre-order. (But don't order online - order direct from me!!).

So many people have asked me how I went about it - how long did it take? when did I find the time? how did I get a publisher? how did I decide what to write about? had I always wanted to write a book?

The answers to most of those questions are boringly mundane really! I hadn't ever really thought very much about writing a book - it wasn't so much that I did or didn't want to, as that I couldn't ever conceive of doing it. I might as well have thought about unicycling around the British Isles! I knew people who had written books, certainly, and they were intelligent, academic, articulate people. I didn't feel as though I was any of those things, and I certainly didn't think I was 'clever enough' to write a book.

Even if I had got as far as thinking I might like to write a book, I wouldn't have had much of a clue as to what I might write about. I love reading books, but one of the consequences of reading a lot is that it can seem as though pretty much every book you could think of has already been written. I couldn't have really imagined what I might have to say that would add anything to what had already been said.

I'd read a few books on singleness, but not many - mainly because there didn't seem to be many around. I'd read a few from the US, which were interesting, but coming from a very different social and cultural background from ours here in the UK. I also hadn't really heard many talks on the subject. That was ok - it didn't seem to be a huge lack in my life. I was aware, however, and especially as I got older, that there were occasionally times when there was something of a miscommunication between me and my married friends, or when the language which was used in church suddenly felt a bit jarring.

[Throughout this time God was speaking to me about my own singleness and what that might look like for the future - but that's another story... (you'll have to read the book to find out more!)]

One day I was asked if I would speak at one of the New Wine summer conferences about singleness. I said no, because to be perfectly honest, having not read or heard much on the subject, I just wasn't quite sure what there was to say. Was this an area that really needed teaching on? And if it did, was I the person to do it? I wasn't at all sure. It seemed that God had different ideas though, because suddenly one morning I woke up with 2 seminar titles in my mind, and I was completely certain that I had to speak on those 2 subjects (that sort of thing doesn't happen to me often!). I did do those 2 talks, and have since done them in other places too, and those 2 titles became 2 chapter titles in the book - 'Living a God-obsessed life in a sex-obsessed world' and 'Living a God-obsessed life in a marriage-obsessed church'. (I knew the titles came from God and not from me because they were actually rather good!).

As I did those first 2 talks, and then subsequently as I did others in the months which followed, something began to stir in me. I found myself getting more and more passionate about the topic. I loved speaking about singleness! I loved reading about it and thinking about it and talking about it. I enjoyed meeting other single people and hearing their stories and learning from them and encouraging them.

Then one day, my friend said, "you know all these talks you're doing - you've got a few chapter headings for a book there." And I thought "ha ha, that's really funny." But the thought didn't go away. I kept wondering about it, and thinking of ways in which it actually might work. The problem was that I had no idea how to actually go about writing a book, and I was worried that no one would be interested in it anyway. I spoke to another friend, who had written a number of books themselves (one of the intelligent ones I mentioned!). He very kindly introduced me to Monarch, who had published some of his books, and they agreed to read some draft chapters. I thought there wouldn't be any harm in sending them a couple to see what they said.

From there, the whole thing just snowballed. I look back on it now and I can't remember quite how it all happened. I don't even recall the precise moment at which I thought "yes, let's do this." I just know that I started to write, and I found that I had things to say, and I really, really enjoyed it. Of course it was hard work fitting it in around everything else I was doing, but let's face it, we always find times for the things we enjoy doing, and we should always find times for the things we're called to do - and this was both of those!

As the deadline approached (terrifyingly quickly) there were a few crazed evenings where I finished 'work' at 10pm and then started on the book, sometimes not finishing till 2am. That wasn't a huge amount of fun. But the sense of achievement on getting to the end was amazing. I am SO excited about this thing that I have produced! I really hope other people like it too, and find it useful, but whatever happens, it's been an amazing experience. I'm pretty sure that if I can do it, you can do it, so if this has always been your dream, then why not give it a go!

Over the next few weeks I'll blog a bit about each of the chapters, to whet your appetite a bit, ahead of the release of the book in June. It is SO exciting and SO terrifying! 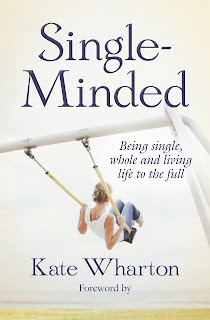