A few months ago we decided to establish a little 'community garden' across the road from church, on a patch of wasteland. It was mainly the idea of Rach, a fab member of our church, who heads up our work with young people. She approached the council, who own the land, and they agreed to let us use it, and even helped us out with resources, funding and workers. We worked with them, one of the local RSLs, and a nearby youth centre. A fabulous artist came and did sessions with the kids and young people producing 3 huge murals featuring all their favourite Liverpool landmarks. They were bolted to the wall, and a big flowerbed was sunk into the ground. The nursery class from our church school came over to do the planting. We had a launch event with local community groups and it was lots of fun. Seeing the garden every day makes me smile. It looks lovely, a ray of sunshine in the middle of a patch of derelict and deserted ground.

Or at least, it did look lovely - for a while. Because after only a few months, I went past one day to discover graffiti sprayed all over the murals. There were huge letters drawn in thick black paint. I couldn't see how it could be repaired, but Nicola, the amazing artist, came and worked her magic and it looked as good as new. Phew!

Until last week - when I drove past and suddenly realised I couldn't see the boards. When investigated I found that all 3 of them had been ripped off the wall. 2 were damaged 'just' from being ripped off - they had holes where the bolts had been (the bolts were still attached to the wall). The third was more badly damaged - it had 2 big tears across it, and large pieces knocked off at the corners. I gathered up all the small pieces although I doubt they'll be able to be repaired. The boards were too heavy to move, even when I gathered a couple of helpers, so we left them there and hoped for the best. We're currently waiting for someone to come and put them back up.

I've been thinking about this a lot over the past few days. I was absolutely devastated when I first saw what had happened. The boards looked such a mess, and as if that wasn't bad enough, they had also trampled all over the plants in the flowerbed. I can't understand why anyone would want to cause such damage and destruction in such a wanton way. I'm not naive, I know vandalism happens - a lot! - and I've experienced it many times when my car, house and church have all been damaged in various ways. For some reason, though, this seemed even more wantonly destructive than normal. Maybe it was the fact that all we'd been trying to do was make the local area look a bit nicer. Maybe it was the fact that it had been local kids who had done the painting themselves. It just made me so sad.

I started to wonder, if we found out who it was who had done the damage, and if we asked them why, and if we were able to genuinely have a conversation about it - about what was in their minds as they did it, and what they hoped to achieve - what would we discover? Would it be that they were "just bored"? Understandable in one way, I guess, in an area with few resources - and something we're trying to remedy by creating activities they can engage with. Or would we, I wondered, find out something more, something deeper, if it was even possible for it to be articulated?

You see, I wonder whether there's something about us not being able to cope with beauty, somehow. I wonder if in some way that's what sin is - turning away from God, and from his goodness, and from his right, perfect, beautiful way to live, because we simply can't handle it. There's something about us longing for beauty and truth and goodness, and yet suddenly turning around and randomly destroying a beautiful thing for no apparent reason. I feel like that's sometimes how I live and behave. I destroy beautiful things. I damage what is good. I vandalise what is holy.

God's way, and God's will, is about good not evil; about light not dark; about hope not fear; about beauty not ugliness. Paul puts it this way in his letter to the church in Philippi - "you’ll do best by filling your minds and meditating on things true, noble, reputable, authentic, compelling, gracious - the best, not the worst; the beautiful, not the ugly; things to praise, not things to curse."

I want to be someone who seeks out beauty in God's world, and who speaks and acts in a way which creates beauty, rather than destroying and damaging it.

When I started out writing this post it was going to be about how it's hard to keep on going when obstacles come along, but it's turned into something completely different! Maybe I'll write that post another day... 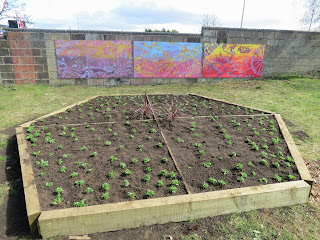 This is how our lovely garden looked when it was first created. Recently the flowers looked gorgeous!