Whom shall I fear?

I've been thinking a bit about fear today. This is mainly because yesterday I did something that absolutely TERRIFIED me - a 120 foot freefall abseil inside Liverpool Cathedral. I realise some of you have already had to stop reading, look away from the screen and take a deep breath. Others of you are thinking "ooh, that sounds like great fun!" Isn't fear a fascinating thing? We're all scared of different things (I don't think I believe there are many people who truly aren't scared of anything at all).

For some people, spotting a spider in the corner of the room brings them to utter, paralysing terror. For others they would pick up the spider without a care and put it outside, or carry on with their business while ignoring it (I'm in the second group). I do however have a huge phobia of snakes. I realise a lot of people aren't wild about snakes, and we'd probably all be a bit scared if one crawled in through the door. But I'm almost as scared of pictures of snakes as I am of the real thing. I simply can't stand to look at a snake. It reduces me to shrieking horror and I genuinely feel sick. It's the very essence of a phobia - a totally irrational fear. A photo of a snake, or a snake in a glass case, cannot do me any harm at all, and yet I am terrified. Why? I have no idea! Where did that fear come from? It's been there as long as I can remember.

Some of our fears are rational and logical; others totally irrational and maybe a bit odd. We can be cruel about others' fears, too. I'm always a bit nervous about telling people about my snake phobia (I thought twice before typing the last paragraph) because all my life when people have found out there have been some who have thought it would be hilarious to immediately show me a picture of a snake. Why on earth would you do that? I know, I'll terrify this person half to death - that'll be fun. People can be strange...

Who am I to judge what someone else finds scary? Of course there are times when it's good to try to get over our fears. or to tackle them head on, especially if they're stopping us from doing something we want to do, or holding us back in some way. Fear can really hold us back so trying in some way to conquer it can be a good idea.

So... the abseil! I'm pretty scared of abseiling. I did it a few times when I was in Guides, and I was NOT a fan. I generally had to be persuaded/coaxed/shoved off the top of wherever we were, and I was always incredibly relieved when it was over. I hoped that as an adult I could steer clear of such ridiculous pastimes and all would be well. Then a couple of years ago on an outward bound day the dreaded moment arrived once again - abseiling! Various options presented themselves - I could simply not do it. I was an adult, after all, and if there were any benefits to that state surely one was the ability to simply opt out of those experiences we do not wish to have. But no, I'm too much of a rule-follower for that to really work. We were all abseiling, so I had to abseil. I told myself it was fine. I was older now, wiser, more mature. It was mind over matter. I could do it. I was wrong. I won't bore you with the details, or we'll all be traumatised, but it did NOT go well. I got in a muddle over the bit where you have to lean back and keep your feet flat, and then I got scared, and ended up with my head nearer to the ground than my feet - which I'm pretty sure is not what's supposed to happen! Of course it was fine - that's what the ropes (and the man at the top holding them) are there for. I made my way down (whimpering!) and arrived safely at the bottom, shaking like a leaf but essentially unharmed. I did however swear off abseiling for the rest of my life.

At St. George's, we are in the middle of spending an awful lot of money on getting our roof fixed. Last year we spent c.£250,000 stopping most of the leaks. We're about to begin work which will cost another £250,000. We're one of the most deprived CofE parishes in the country to fundraising is tough. We get grants from HE and HLF and other charities and grant-making bodies but we still have to raise a fair bit ourselves. Often people have suggested something like abseiling but I've always just said there's no way I'd do it. But before Christmas I saw on Liverpool Cathedral's website that they were doing an indoor abseil and something in me just said "do it." I completely surprised myself by signing up, enlisting fab curate Ashley along the way (although she thought it was just great fun!).

Life had been busy so I hadn't had much chance to think about it (apart from begging requests on social media re sponsorship!), especially in the week leading up to it, which had been, I must say, a bit of a pig. So it wasn't until the Thursday night that I really had chance to think about. I seriously questioned my sanity at this point. I vividly recalled the last time and how terrifying it had been. What was I thinking? And yet I knew I couldn't pull out - too many people had sponsored us.

The day arrived and Ashley and I arrived at the Cathedral. A few lovely people from church had come to cheer us on (and take photos. And laugh, really). I was genuinely petrified. I really didn't know whether I'd be able to do it, and I was considering how humiliating it would be to get to the top and then have to beg to be allowed to go back down (the long way!).

I've always wanted to go up to the Corona Gallery in the Cathedral, so that part was quite fun. The view was amazing. I know that for some people their dreaded fear is heights, but I love being really high up and looking down. We got our harnesses on and stood on the edge. There was a genuine possibility I would lose my porridge over the edge. The man in charge was so very lovely and calm and somehow made the whole thing seem entirely normal. And before I knew it, I was over the edge - the most horrifyingly terrifying bit done. We were in front of brick to begin with, then it finished and the freefall began, which was odd as there's then nothing to kick against. I stopped to look around but realised if I thought about it for too long I'd remember I was meant to be terrified, so I cracked on, and reached the bottom to gratifying whoops and cheers. I'm fairly confident that if they'd times everyone who came down that day I would have been the fastest.

It felt amazing! I have always been a bit of a scaredy cat, even as a child, never one to go on big roller coasters or jump off high places. We often say of small children that they have no fear - well, I did! But when I'd completed the abseil I felt so good. If it doesn't sound naff, I felt really proud of myself. I had genuinely been afraid and yet I had done it anyway. And it was ok! I would actually do it again, too. Although maybe not for a day or two...

There's been an interesting response on social media - lots of people declaring they wouldn't do it in a million years, but a fair few others wishing they could have had a go too. There are definitely some things I can't ever imagine doing - a parachute jump and a bungee jump are both most definitely out of the question. I'm not saying everyone should leap off a 120 foot building to face their fears. But, knowing I was afraid, and doing it anyway, felt pretty good.

When I was a teenager I had loads of 'No Fear' posters in my bedroom - "Don't let your fears stand in the way of your dreams" and all that business. I can't say they helped. What did help, after the abseiling horror story of a couple of years ago, was when God quietly and gently reminded me that he had me, that I was safe, that he was never going to let me go. I could "fall off a cliff" (I like to exaggerate a bit when I tell the story!), but God was not ever going to let me go.

So, yesterday, on the top of that abseiling platform, that was what got me over the edge. I'm safe. I'm always safe, even when life is difficult and scary and everything seems to have gone wrong. God has hold of me, and he's not going to let go,

Just so you can be really impressed, here's what it looked like: 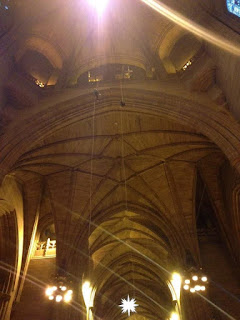 And you can still sponsor us, too: www.justgiving.com/stgeorgeseverton
Posted by Kate Wharton at 21:59