Living with a legacy in mind

It seems as if death has been very close lately, doesn't it? Of course we know that death is inevitable, that it comes to us all at some point, and that we don't tend to get much advance warning (which is probably for the best). But somehow, lately, it has felt even closer than normal.

We all know that in 2016 it felt as though more (and more famous) celebrities died than in previous years (I have no idea if this is statistically true, but it is certainly how it felt). In the last month or so I have known by reputation (although not personally) 4 well known and respected Christian leaders who have died in their 30s, 40s and 50s (so all, we would say 'too young'), and unexpectedly. I also have a number of good friends currently doing battle with serious illnesses of various kinds.

All of this makes us stop and think - or at least, I think it should do. The way it's been making me think is not about my own death, as such, but about my legacy. What will I leave behind? How will I be remembered?

Inevitably when someone dies, especially when they are relatively young, and it is unexpected, there is a huge public outpouring of grief and remembrance. This is entirely right and appropriate. We tell stories of that one time we met them, or of that thing they wrote that we read, or of that story we heard about them. We look for connection with them, because we feel affected.  We are reminded of our own mortality. We feel fragile, somehow.

And I've wondered, as I've read social media posts and obituaries and memories - what would people say about me? What would the stories that would be shared?

(This is definitely not an invitation to tell me!)

What it is, is a challenge to myself - and to you, if you would like to receive it as such - to reconsider how I live, and the impact I make on the world around me.

During the almost-twelve-years of my ordained life I have officiated at innumerable funeral services. I have sat with families as they have tried to describe to me their loved one - usually someone whom I have never met myself. There are certain phrases that clergy chuckle about among themselves for their 'hidden meaning' - phrases like "she didn't suffer fools gladly," and "he kept himself to himself," and "she knew her own mind." But I am sad when I sit with loved ones who don't have anything good to say about the deceased person, or perhaps not anything at all.

Whether we're famous or not, whether at our funeral we are mourned by 1, 10, 100 or 1000 people, we all leave some sort of imprint on the world in which we have lived.

And this isn't about me (or it shouldn't be, at least!). It isn't just about hoping everyone says nice warm fuzzy things about me and how I was a jolly good fellow. This is about living for the One whose approval is all that ultimately matters. I want my life to be a signpost to Jesus, so that when people see me, they see him. I know that so often I fail to do that, but I want to try.


I haven't given any thought at all to New Year's resolutions. I tend not to have a very high success rate. I've often thought about trying to lose weight, but I have a lot of sympathy with the post I read which said "at the start of 2016 it was my goal to lose 10 lb. Only 15 lb to go."

And yet as I've been writing this post the thought has occurred to me that a good aim for 2017 (not a resolution, mind, as I'd quite like to keep it!) - might be to spend some time thinking about the sort of legacy I want to leave behind.

How would I like people to speak about me, to describe me, to tell stories of me, after I'm gone? I can influence that now, by the way I live, how I treat people, what I do, what I say.

I'm going to try to live with a legacy in mind. 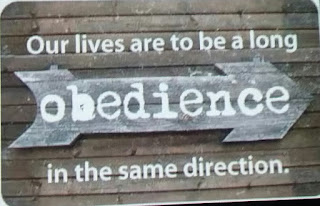