I admit I am a tad nervous about this post! I really believe in what I'm about to say, obviously, but it's just not the sort of thing you talk about, is it?! The thing is though, maybe it should be, and so, well, here goes...

If you've ever heard me do a talk on singleness, or read my book (and if you haven't, do buy it here... https://www.eden.co.uk/shop/single-minded-4066886.html!!), then you'll have probably heard me say this, but there's something a bit different about actually writing it down.

Anyway, you may recall that in 2005 a Steve Carell film came out called The 40 Year Old Virgin. I've never seen it, and I don't intend to, but it doesn't take a genius to work out what it's about. The main character, Andy, played by Carell, is a virgin. His friends, his work colleagues, the girlfriend he eventually finds - none of them can believe it. It must be a joke, surely?

This is literally my life, and apparently it's a joke. I mean, it all seems to be going pretty well to me, but evidently it's so impossible and hilarious and ridiculous that people make comedy films about it. How is that supposed to make me feel? Well I don't suppose the people who made the film thought about it, because they probably didn't imagine there were any actual normally functioning adults in that category. I remember years ago a GP literally refusing to believe I was a virgin - and I was only about 22 at the time!

I've become much more aware lately of how often the word 'virgin' is used as a joke. Still. Twice in the past few weeks it's been a punchline to a joke on Mock The Week - it's always something around dinosaurs and comic books and cartoons (for men) and cats and bags and patterned jumpers (for women) and yada yada yada nerds and frumps don't have sex. It's such a ridiculously lazy and stereotyped attempt at humour. It's like being in some kind of adult school playground equivalent where the worst insult/punishment you can think of is not having sex. I mean, I love MTW but seriously, 1989 wants its jokes back.

For several years now I've joked when I've done singleness talks that when I turned 40 I was going to get a tshirt made saying 40 Year Old Virgin. Well, in April this year I celebrated my 40th birthday and I just thought - what the heck! So it was that at the 3 singleness seminars I did this year at New Wine events, I wore the tshirt you can see in the photo below.

What was fascinating about it was the reaction it provoked, in others as well as in me. I didn't wear it all day, partly out of embarrassment, but mainly because I didn't want to be the cause of lots of little kids turning to their parents and asking at full volume, "Muuuuuuum, what's a VIRGIN?" So I only put it on for the seminar, in fact there was a 'reveal' moment in the middle. It got a lot of laughs, and to my surprise hasn't yet ended up online! But I was aware that, even though I had chosen to do this, and was fully on board with the point I wanted to make, there was still a bit of me that felt awkward and embarrassed, like there was something odd or wrong about this. Cultural expectations really can get in our heads, can't they?

And the reactions from friends I told about it was interesting too. Most laughed uproariously and cheered me on (and dared me with other places I should wear it!). Lots said I was "brave." Some looked genuinely a bit horrified, and obviously didn't know what to say.

A month or so on and I'm still pondering. I guess I can legitimately still wear the tshirt until my next birthday eve. To be honest I doubt it will get another 'outdoor' wear. I'm glad I did it though.

Because,here's the thing. I AM A VIRGIN AND MY LIFE IS GREAT. There. I said it. Now, I realise there will be some people reading this who are virgins and whose life is not great. It's not as if the two things automatically coexist. And my life isn't *always* great, obviously - whose is? Sometimes people write to me to tell me how horrified they are about my singleness/celibacy commitment because they simply don't think it's possible to live a happy or fulfilled life that way. Well, here I am, giving it my best shot.

Would my life be different if I'd had sex, if I'd got married, if I'd had kids? Well obviously. Would it be better? There is literally no way of knowing that. Would I change it if I could suddenly have those things? Do you know, I wouldn't - it's taken me a while to get to the point where I can honestly say that, but I can. (I mean don't quote me on it a week on Thursday, because you just never know...).

This is my calling, and so I know some people think it's 'easier' for me to live this way (like it's always so 'easy' to live out the stuff God calls us to, right?!). But it's my belief that for anyone who isn't married, sex isn't an option, we're called then to celibacy. It's such a misused, misheard, misunderstood word. We've made sex such an idol, such a symbol of our supposed freedom and choice. And sex within a loving marriage may well be a wonderful thing (although it isn't always). But I don't believe sex is necessary for a contented life, I truly don't. It is sometimes REALLY hard to live without it (!) but actually there can be real joy and freedom in that.

And I really, really want them to know that there's no shame in being a 40 Year Old Virgin. 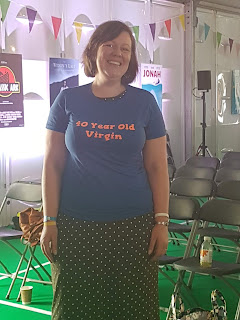