Self-partnering and the interrogation of the single

I didn't think my last blog post was controversial enough (!) so I thought I'd try harder this time...

So... you can't have missed the whole 'self-partnered' hoohah that kicked off recently?! Emma Watson is approaching her 30th birthday. In an interview with British Vogue she said that she felt "stressed and anxious" about it, because of pressures that she felt about her personal life. "I realise it's because there's this bloody influx of subliminal messaging around. If you have not built a home, if you do not have a husband, if you do not have a baby, and you are turning 30, and you are not in some incredibly secure, stable place in your career, or you're still figuring things out... there's this incredible amount of anxiety."

She goes on to talk about how she feels about being single. "I never believed the whole 'I'm happy single' spiel. I was like 'this is totally spiel.' It took me a long time, but I'm very happy [being single]. I call it being self-partnered."

I mean, even the very fact that Emma feels the need to say that she isn't considered to have "built a home." Whatever age you are, and whatever your marital status, if you have a place in which you live, then you have built a home.

On Nov 7 there was a story about Phoebe Waller-Bridge in the Daily Mail (I know, and I am SO SORRY, but someone shared the article on Twitter. I'm not going to link to it here for reasons I hope are obvious). I think PWB is brilliant, and Fleabag is a work of actual genius. But the DM didn't want to discuss her talent, or her award winning TV shows, obvs (it takes until paragraph 12 before Killing Eve anmd James Bond are even mentioned). No, they wanted to report the shocking news that Phoebe "'thinks' she wants to have children" but hasn't yet made up her mind. It's the headline that really gets me though (I know, I know, clickbait, but honestly...). It says this "Fleabag star Phoebe Waller-Bridge, 34, admits she is debating having children... yet insists she's a 'see-what-life-throws-at-you kind of person.' Admits. ADMITS. And 'yet'. Those are the 2 words that really riled me. 'Admits' isn't a neutral word. It's loaded with expectation. You don't 'admit' something that you're proud of, or even something sort of middling. You only 'admit' something that is associated with shame, disappointment, unease. And then that sneaky 'yet,' as if the 'admits' part can't really be true, and they're determined to catch her out.

Why does this article need to exist? (I mean, why does the Daily Mail need to exist, but that's a far bigger question than I have the energy for right now). Why is this brilliant, funny, intelligent, articulate, independent woman being forced to 'admit' that she isn't sure whether or not she wants children? She's only 34 for goodness sake! And - I can't believe this even needs to be said, but we're in strange times - this has got LITERALLY NOTHING AT ALL to do with anyone else.

And I'm sure you don't need me to point out that there are approximately zero interviews taking place with men in their thirties asking them about when they plan to settle down and have kids.

I find the interviews and the reporting around all this stuff really disappointing, and I wish women weren't still being defined by who we are or aren't married to, and by whether we have or haven't given birth.

I find it depressing that it's still so hard for so many people to believe that somebody could feel happy and fulfilled while also single and childless. (Tomorrow is the 2nd anniversary of my beLOVED ceremony, about which you can read more here: http://katewharton.blogspot.com/2017/10/beloved.html)

(Don't get me wrong, I know that there are many people who don't want to be single and childless, and they wrestle with that, and that's ok too. It is what it is).

So here's the thing. I wonder if maybe there could be some thinking about what we consider the norms to be, relationally speaking, and how we ask people about themselves. I've blogged in the past about 10 things single people wish married people wouldn't say (http://katewharton.blogspot.com/2014/02/10-things-single-people-wish-married.html) and 10 things not to say to me when I'm holding a baby (http://katewharton.blogspot.com/2017/11/when-im-holding-baby.html). I really don't want to make people paranoid about what is and isn't ok to say, and I really don't want to be offendable. But sometimes the questions, and the expectations, and the raised eyebrows are just really hard.

I totally get Emma Watson's comments about her singleness. I also had a bit of a crisis as I approached 30. What was wrong with me? Why wasn't my life going to plan? I might not choose to use her phrase 'self-partnered' but I'll blooming well defend her right to use it. I've been a bit sad at some of the criticisms I've read about it from other Christians. (A friend of mine summed it up well - "she's just a millennial, speaking millennial"!) I don't think it necessarily means she's selfish, or self-obsessed. I don't think it necessarily means this needs to become a new category of relationship. I think she's just a young woman, trying to navigate life in the midst of a level of fame that we cannot begin to imagine. She's asking big questions, and trying to do the best she can - just like we all are.

So maybe let's be a bit kinder. Let's be careful what questions we ask. Let's strive for more empathy. Let's give one another the benefit of the doubt.

Here's a photo from my beLOVED ceremony. I'm not self partnered, but I have embraced a calling and a choice to stay single, and I'm doing it blessedly surrounded by some awesome people. (Photo credit: Mark Miller) 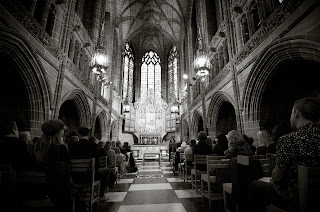