For the past 5 days I've been taking part in Tearfund's 'Mean Bean Challenge.' For 5 days you eat plain porridge made with water for breakfast, and plain rice and beans (no sauce, no seasoning) for lunch and dinner, and only drink water. I've thought about doing it for a few years, and have sponsored various friends who have taken part. This year I finally decided to go for it.

I knew it would be a challenge, but honestly I had no idea how much of one! I thought it would be fine to eat the meals as above. I thought the hardest part would be feeling hungry, and missing thinks like my morning cuppa.

Wow. It has been SO HARD. I mean, it's only 5 days, but gosh I've struggled! The first day wasn't too bad, as it was all novel and exciting. The second day I had a really bad headache all day (I don't drink caffeine so it can't have been that, but maybe it was having no sugar?). The third day I literally just couldn't face any more beans. Weirdly, I didn't feel hungry, so I actually skipped breakfast and lunch and had a massive bowl of porridge for dinner! I've felt tired and lacking in energy, thirsty even though I was drinking lots of water, and I'll leave you to imagine some of the other consequences of eating that many beans, but no fresh fruit or vegetables...

I couldn't believe how much of an effort it was to get the food down. I didn't always finish the meal, even though the recommended portion sizes were pretty small. It was just so bland and unappetising and stodgy. I mean, I have travelled to a lot of places and eaten a lot of random food, and there's pretty much nothing I can't eat, but this was hard work!

Fortunately I was in a position where I could get home for all my meals, as it would be impossible to eat out doing this, and if away from home you'd end up either reheating stuff or eating cold rice and beans - bleurgh!

Some things were particularly hard. I was due to see friends one evening (arranged before I'd signed up for the challenge). They went out for a meal which I skipped, but then I joined them for a drink. Sipping my glass of water while they were on the wine wasn't much fun! There was another pre-arranged event, a meeting in a coffee shop. I do love a decaf flat white, so again sitting there with water was hard! The hardest thing though was baking a cake for an event at church, and then going along and being surrounded by all the lovely home made cakes. I LOVE cake! And I love baking (and, let's be honest, licking out the bowl!). There was A LOT of willpower required that day. And then this morning I was leading Youth Church and there was toast. Oh, the smell...!

At our evening service we have cakes and pastries. Most weeks I try hard to resist them. But tonight I asked them to buy cinnamon buns, and warned everyone to stand clear as the clock turned 6pm!

Despite how hard it's been, I am SO glad to have done it. At the time of writing, adding up both online and offline donations, I've raised £615 (plus Gift Aid). That's fantastic, and will do such a lot of good. (Plus for any money raised before 17th May, the government will double it - yay!).

Tearfund is such an amazing charity, and very dear to my heart. I have travelled with them to Thailand, Nepal, Uganda and Rwanda, and seen first hand the incredible work that they do.

I've also travelled to Pakistan (although that was with Girlguiding, not Tearfund), and so the story of Nida, which is at the heart of the Mean Bean Challenge, really struck a chord with me. Nida lives in Pakistan. Her husband is unable to work due to illness, and so Nida and her 14 year old daughter must support the family. Nida leaves home at 6am, spends all day working at her job as a cleaner, and gets home at 5pm, whereupon she has to do all of the chores at home. Every day she eats a small breakfast and then a dinner of bread with lentils or vegetables.Tearfund, through their local partner Pak Mission Society, are aiming to try to change the story for Nida and her family.

While I was in Pakistan for the second time, 18 years ago, I caught some sort of bug which resulted in a post-tropical infectious bowel thing. Recently some new medication has helped a bit but it hasn't been the easiest thing to cope with over the years. It is possible therefore that I was a bit mad to do this challenge at all! The last day and a half I've not felt great but actually that in itself made me think of Pakistan and of Nida. Now I can eat 'normally' again, but her normal isn't going to change without help.

When I read Nida's story I feel embarrassed by how hard I've found these 5 days. She and her family would have welcomed the meals that I have pushed around my plate. It's because of all the Nidas that I have done the Mean Bean Challenge.

If you've sponsored me, THANK YOU SO MUCH! If you haven't, there's still time...
https://www.justgiving.com/fundraising/katesmeanbeanchallenge2020 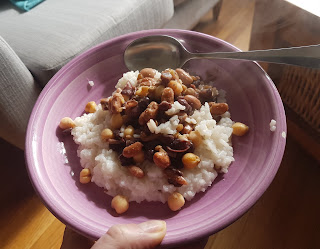