I've been pondering something for a while (that's usually a bad sign tbh...) It's something quite subtle, which you almost might not notice. The problem is, I have noticed, and now I can't stop. Writing this blog runs the risk of you, who may never have noticed before, now also noticing. I'm sorry. Read on at your own risk...!

Here it is. I've noticed a tendency in certain Christian testimonies, for the 'and then they lived happily ever after' part to include "and now they're married with 18 beautiful children" or similar.

Here's an example that I read today, in a magazine I really enjoy, which prompted me to finally write something (even though I've been thinking about doing so for ages). I'm not having a go here at the magazine, or the author, and it was a good article. It just happened to provide an example of this thing.

So in the article there's a story about a guy named Pedro (I would change his name, but the chances are they already changed it when they did the article, so there's no need to make things even more complicated!) Pedro was homeless and an alcoholic, until he found love and care and support and a Christian community which helped him to heal (that bits all great by the way, obvs!).

Here's the thing though. This is how the 'after' part of Pedro's story is described: "Pedro... found a community to support his journey towards sobriety and ultimately a faith of his own. Now, eight years sober, he helps at AA sessions, has married, and regularly cooks for his church's Alpha course."

It happens so often. Not long ago at a women's event I heard something similar: "Lucy (I am making that name up, I can't for the life of me remember what they called her!) has had her life turned around. She was in trouble because of X, Y and Z and her life was awful. And then she met Person A from Charity B and they helped her to sort her life out. Now she's doing this, this and this amazing thing, and she's married with a baby."

I've read it in books, and on social media. I've heard it in talks. OK, maybe I notice this stuff more than someone married would do, but nonetheless it is still actually happening!

Now, don't misunderstand me, I'm not just being a grump (I really hope I'm not anyway!) Obviously, if this person has happened to get married in this period of their life when things are going well, then that's part of their story, and of course it's right for them to tell that if they want to.

The issue for me is when we see the 'marriage and kids' thing as part of the happy ending. This person's life is better now BECAUSE they are married, BECAUSE they have children.

I'm all for celebrating the good stuff. I love to hear testimonies of God at work in people's lives, how their circumstances and their situation have been totally transformed. It's brilliant. But I think there's something about what 'we' (society? church?) see as typical traits of the 'before' and 'after' parts of the story.

I'm being facetious, of course, but actually the only thing that's got any business being in the AFTER column is: AND NOW THEY KNOW JESUS. (Yes, I know, no longer being addicted to stuff and having a roof over your head are pretty good too, but you get my point).

If I'm being hyper-sensitive about this, no doubt you'll all tell me. If I've made you aware of something that's now going to annoy you when it didn't before, I'm sorry. But if this is a Thing, and if you're single or don't have kids or whatever, and you've noticed it as a Thing too, let me know.

I guess what I'm saying is it feels weird when my life (which I'm happy with, and really quite like, at least the vast majority of the time) is seen as not good enough to feature in the AFTER column. Like when my life is some sort of pre-Good-Morning-makeover-style-reveal.

My life is full of Jesus and friends and laughter and kids and chocolate and all sorts of good things. But it doesn't and never will involve marriage, or children of my own. And I'm ok with my own version of the happy ending.

Here's a picture of a sunset, just because they're one of my favourite things, and a pretty good 'ending' for each day, I'd say. 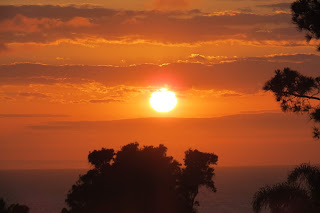