I wonder how often you feel let down by something? Maybe it's something small, a little thing which someone said they'd do but then they didn't do, because they forgot, and it doesn't really matter, but it puts you out a bit, or it's disappointing. Maybe it's something much bigger, which has a huge impact on you and leaves you in a really difficult position, feeling upset or angry or hurt.

I'm sure you can think of lots of times when you've been let down. There are arrangements we make with friends which they cancel at the last minute, when we've been looking forward to it all week. There are promises which are made and then broken as if they never really mattered. There are jobs which don't get done, so that we have to pick up the pieces and work harder. There are people we've supported and walked with and helped who throw it all back in our face.

The personal let downs are even harder to take than the practical ones, aren't they? When we're let down by someone we thought really cared, or who we really care about. When we've given time and energy and love to someone and we wonder why we bothered. When someone says or does something which feels rather like we've been slapped in the face.

At that moment maybe we think (or even say out loud!) - I don't know why I bother. I won't let this happen again. This is their last chance. It'll be different next time. They're on their own now.

The Christian response is to offer forgiveness, to start over again, to wipe the slate clean. Sometimes we're able to do that fairly easily, and at other times it takes a huge amount of effort. Even when we do manage to forgive and to begin again, the feelings of hurt can be hard to shake off. Perhaps we forgive but we don't really forget, so the next time there's a let down it piles up on top of the first one, which has never really gone away, and so then it's even harder to start over.

I find that being let down feels exhausting. I actually feel physically tired sometimes when a person does or says something which really makes me feel let down. I'm naturally a fairly positive and optimistic person, and I try to believe the best about everyone, but sometimes I get worn down by it.

So, recently as I sat feeling grumpy and chuntering away to myself about the unfairness of it all, I found myself suddenly with an image in my mind of God looking on me and my life, and I had one of those moments of clarity about all the many, many ways in which I totally stuff up my life on a daily basis!

To be honest, that list could go on and on, but you get the idea...

Those things let him down because he knows I'm better than that.

And yet, do you know what, he thinks I'm fabulous :)

(He thinks you are too).

He loves me totally and completely and unconditionally and overwhelmingly and massively. He loves me just as I am, without my having to change, and yet at the same time he gently calls me forward into the person he knows I can be - the better, kinder, more generous, more loving, wiser, braver 'me' that he somehow sees.

This blows my mind! It makes me rejoice in his incredible love.

And it also makes me think about how I'm going to try to react next time someone lets me down... 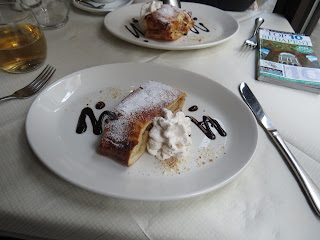 A picture of cake. Because it's your friend and it never lets you down!!