I've just got back from a short break in Dublin. I'd never been, and it turns out Dublin is a beautiful, fabulous city. You may have already known that! But if you didn't, I'm telling you - you need to go! I visited St. Patrick's and Christ Church Cathedrals, Dublinia, the GPO and the Witness History, Dublin Castle, did a walking tour, the Literary Pub Crawl, the 1916 'Beyond the Barricades' bus experience, went to Once at the theatre, did a tasting tour at the Irish Whiskey Museum, saw the Book of Kells at Trinity College and travelled all over the place on the open top tourist bus. I also ate a lot of food and drank a lot of beer! All in all, it was a very splendid holiday. I could have lived with the sun shining a bit more, but that's my only real complaint...!

It was a fairly last minute decision to go to Dublin. I went to Ljubljana for a week in May with a friend (also a gorgeous and wonderful city!), and am lucky enough to have a sabbatical from mid-October, some of which I'll be spending in the US. With all that going on, I hadn't really planned in much other time away - but it turns out that almost a whole year with only 1 week of actual holiday isn't really enough! So, to stop myself from losing the plot entirely I squeezed in this almost-a-week away.

I have a lovely friend with whom I go on holiday fairly often - generally once a year for the past several years. We like pretty much the same things, holiday-wise, so it works well, and we've got a good system going now! I also occasionally go away with my best friend's family, or I go to stay with friends around the country. That's all good.

There are times, however, when I want to go away, but either there's no one available to go away with, or we don't want to go to the same place, or we're not free at the same time, or whatever. It's the single person's holiday curse! In the not-at-all scientific survey I did of some single friends while I was writing my book, I asked them to rate various 'issues' faced by single people. 'Lack of touch' came out at the top of the list of things people struggled with, and 'holidays' came in second.

Whenever I share this list with groups of people when I'm speaking about singleness, married people are generally surprised by holidays being on the list, and certainly it isn't usually something they would guess. (The single people, of course, TOTALLY get it!).

It's a dilemma, especially for me as an extrovert. When I told some people that I was going away on my own, they sort of went quiet, and looked at me in that certain special way and asked "er, are you going to be... ok?" I tended to grin and cheerfully announce "well, there's only one way to find out...!"

I have been away on my own before, for a couple of days to London, and for a few days to Morpeth. However this time was my first holiday "abroad" (I know, it's Dublin not the Far East - but still!). It was only for 5 days and 4 nights, but that's a long time to not know whether I'd have any sort of meaningful conversation with another human person!

Anyway, the good news is that it was fabulous, almost all of the time. It helped that the Olympics was on, so when I got back to my hotel room each evening I could catch up on the day's events. It helped that the hotel had wifi so that I could spend time on social media when I was there - in fact that and a central location were my only 2 real requirements hotel-wise.

Often when I speak about singleness I have conversations with people who are too scared to go on holiday on their own. Sometimes they're too scared to go out for a meal or to the cinema or theatre on their own. I get that, I really do. But the thing is this - how much are you willing to miss out on? All those places you won't have visited, all those restaurants you won't have eaten in, all those films and plays and shows you won't have seen. So be brave! If I can do it, you can (and actually if you're more of an introvert than me, you might jump at the chance!).

So below (in no particular order) I offer you a few plus points of holidaying alone, a few suggestions of things which might help, as well as a few light-hearted grumbles and warnings...
Anyway, what about you? I'd love to hear. Do you agree, or disagree? Have you holidayed alone? How did it go? Or would you like to but have never quite had the nerve? Do share your thoughts and stories.

And to end, the final downside of holidaying alone - you end up with lots of photos of where you've been, but hardly any of you! (I know, I know, selfies, but I feel so daft!). And so here is the only photographic evidence I have that I was actually in Dublin at all - from the Irish Whiskey Museum, no less! 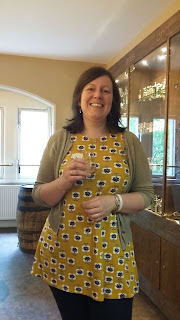