So here's the second blog post from my sabbatical, and - yay! - I've made it to the USA! I arrived in New York on Tuesday 16th and spent a fantastic few days there. Lots of my friends seem to have been to New York so you may well know and have experienced all that I'm about to say, but it was not only my first time in New York but also my first time in the US, so it's all new to me!

My first, and probably most obvious reflection, is just how BIG everything is! New York felt like an absolutely mahoosive city. The roads are bigger, the cars are bigger, the buildings are bigger. But then of course it's a completely enormous country, so I suppose they would be!

I love most cities, and I definitely loved New York. There are so many things there that are really famous cultural icons and if you stop to think about it you can probably name quite a number of sights. Armed with my trusty Lonely Planet guidebook and a fortunately very sturdy pair of shoes, I set off - and I'm sure I walked 1000 miles during the week!

I loved visiting the various tourist spots and sights. The Statue of Liberty was fantastic- one of those incredibly famous landmarks that you've seen so often in photos so you think you know, and then all of a sudden there it is in front of you in actual real life. It's an interesting experience, actually, that of seeing a thing that you sort of feel that you already know - similar for me to the Taj Mahal or Mount Fuji or the Eiffel Tower. Yes, you see it and think "wow how amazing and beautiful", but you also sort of think "oh, there it is then" - because of course it isn't a surprise, you already know exactly what it's going to look like. I wonder whether our world-as-village, where through media and especially tbe internet, we know everything all at once and all the time, has taken away some of the awe and wonder of travel and exploration.

Anyway, that aside, it was still an incredible thing to see. I was incredibly fortunate to get a ticket to climb up to the crown - apparently you usually have to book 6 months in advance, but I casually had a look online the day before and there it was! It was a heck of a climb but worth it for an amazing view and a sense of having done something really special and unique. The museum at Ellis Island was also an excellent opportunity to learn more about immigration into the US over the years.

In terms of great views, I also enjoyed going up the Empire State Building during the day, and the Rockefeller Centre at night, for some incredible views over the city. I'm not at all scared of heights, and I love being high up and looking down at an amazing view.

The 9/11 memorial was truly incredible and a real highlight of the trip (if you see what I mean). It was beautifully done. The outdoor memorial pools are gorgeous and seeing the names carved around them, and roses on those names whose birthdays were that day, was so moving. The museum was also incredibly well done. One of the things which has really moved me was a blue wall (see the photo at the end) - they asked over 2000 people who experienced that day in the city to remember what the colour of the sky had been, and then they recreated each colour in a small square. It creates a stunning visual tribute. Walking around the museum of course I remembered where I was on that day, and reflected on how much our world has changed in those 15 years. It was especially poignant to hear parents discussing it with their small children who weren't even born then.

A bit of an ambition of mine was fulfilled when I got to see a show on Broadway. The discount ticket office opens at 3pm and I began queuing at 1:45pm and was third in line! There was a great sense of camaraderie as we queued and all chatted together. I got tickets for Matilda, which is what I'd hoped to see, and it was fab.

I'm fairly used to London, and have travelled a fair bit to other major world cities, but still I found New York huge and noisy and busy. Around Times Square at the weekend it was almost impossible to move down the streets! I loved it, but I can see why some people don't, if that level of noise and crowd and general craziness isn't your thing!

I also found it a fairly easy city to get around, which was great. The subway is really straightforward and amazingly cheap too - I got an unlimited week's ticket for $30 and I seriously got my money's worth! The grid and numbering system of the streets also means it's fairly easy to navigate and if you do end up going in the wrong direction then you realise pretty quickly!

I LOVED Central Park, and couldn't stop taking photos of it and all the amazing autumn colours.

I didn't actually do all that much shopping, which is the thing everyone told me I should do! I think partly it was only having a few days and wanting to spend them sightseeing rather than shopping- perhaps if I went again I would do more! Partly too it's the current economic situation, meaning that it isn't as cheap to shop there as it once was. I did wander round Macy's and Saks, and they were amazing places, but also fairly overwhelming - you'd need days just to get around them!

I felt safe the whole time, which was obviously great. I stayed in an AirBnB on the upper west side in Harlem.  I LOVE AirBnB! It was lovely, and really easy to get to on the subway. I felt totally safe walking back there in the evening. Wherever I was in the city people were friendly and helpful, happy to chat, happy to give directions. The legendary US customer services proved true too - it was probably the easiest place I've ever been on my own, in terms of waiters etc not being fazed at my asking for a table for 1 - and when I did, it was usually a good table, rather than one shoved in the back next to the loo, which generally happens if you're on your own!

I went to church on Sunday, to one of the Trinity Grace campuses, on the upper west side. It was great, and I enjoyed it. There were a few moments of awkwardness though, when I first arrived and it seemed like an age before anyone spoke to me, when I sat down on my own surrounded by a crowd of happy, chatting friends, and at the end when it just finished and there didn't seem to be coffee or anything, so I just sidled off home. People did talk to me, and were lovely, so it's nothing they did wrong, but it was a very important reminder to me of what it feels like to be new in a church setting - even if you're a Christian, even if you're fairly confident. I felt a bit uncomfortable, and that's important for me to feel, because it reminds me of how scary it is to walk into a church you don't know.

This was just the first week of my US adventures. It was a bit of a fun, touristy week. More profound and spiritual reflections will hopefully follow... But it was a great week, and I definitely recommend New York as a place to visit.

Below are just a few photo highlights of the week... 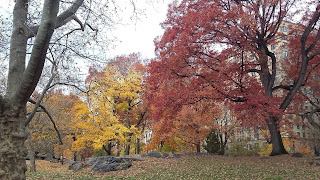 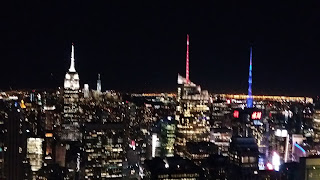 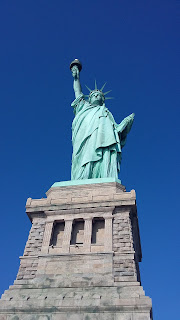 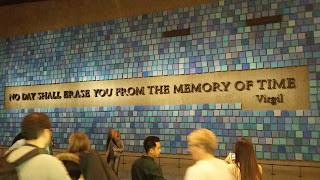