This was a really interesting book to read and review. There are so many conflicting thoughts and opinions around about social media and the whole online world. Some people think it's the best thing since sliced bread, a fabulous gospel opportunity, a way to reach out and spread the good news and connect with people you wouldn't otherwise meet. Some people think it's the work of the devil, all about spreading lies and hate and evil, bringing out the worst in people and distracting us from the real work of the kingdom. The truth, inevitably, probably lies somewhere in between those two extremes. Like many things, social media and the internet can be used for good or for evil, and there are plenty of people and organisations doing both of those things.

It would be easy to assume that the Bible has nothing to say about the online world - after all computers and electricity couldn't even have been dreamed of during the time the Bible was written, let alone the internet. But it's vital as Christians that we consider what God thinks about all aspects of life, and that we weigh up what we do and say and think in the light of what we know to be true. This is what theology does - it enables us to look at an aspect of life in our world and to consider it within the gaze of God, asking ourselves what he wishes to say to us about it.

This is what David Robertson has sought to do in this new book: What Would Jesus Post? - A Biblical Approach to Online Interaction. Personally I'm a big fan of social media, as you'll know if you follow me, and have been assailed by multiple posts on anything from chocolate to church to squirrels to fencing to gin to Jesus... and much more! So I was fascinated to read what David Robertson had to say, and to see what he thought Jesus would have made of the world of social media.

My own view is that Jesus would have been all over social media - he was never one to shy away from a chance to interact with people, after all. He was always where the people were - even when that meant being in a place that the 'good', righteous, religious people felt that he shouldn't have been. Of course Jesus would have used his social media accounts without sinning, as he did everything - unfortunately that's something I can't claim to have always managed, and I doubt whether any of us have. But in 2018 I simply don't think that we can declare the whole online world to be morally bankrupt and declare that we want nothing to do with it. The internet isn't going anywhere, and I believe that we need to understand it and engage with it - in a way that's shaped around and formed by what we know to be true of God's kingdom rule. So what might that look like?

I really liked how practical the book was, and that it's structured in such a clear and readable way. It constantly refers back to the truths and wisdom of the Bible, and it is also totally up to date and relevant to 21st century life and culture. There are helpful tips about how we can all make better use of social media in our kingdom ministry, and there are also important challenges as to just how we come across, how we engage, how we  interact. We're reminded to "pray before posting" and to think about the responsibilities as well as the opportunities that come with having a "personal digital pulpit."

The overall advice from this book is that it's important for Christians as individuals, and for churches as organisations, to engage on social media, and to make the most of all that is offered by it. But crucially we're also encouraged to be wise, discerning, humble, hospitable and generous as we do so. There's also a really important and interesting challenge about our overuse of/reliance on all things online, and an encouragement to consider an occasional "digital sabbath." Ultimately, we're reminded that we are "stewards of a digital footprint."

Overall I think this is an important and timely book for Christians. I haven't come across anything quite like it before and it definitely gave me a lot of food for thought. I'm very much pro all things internet (well, most things...!) but this has given me some important new ideas, and questions to ask, for which I'm grateful. 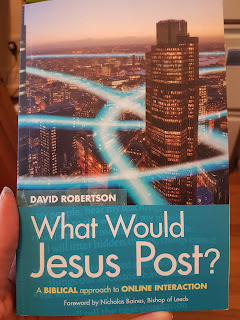