Well today marks 25 years since the first woman was ordained priest in the Church of England. 25 years. In some ways that seems like a long time. But also I kind of want to go "25? TWENTY FIVE?!" How is that all?!

I remember hearing on the news the day the vote had gone through General Synod. It's amazing now, being on General Synod myself, and sitting in the chamber imagining what it must have felt like on that day, as people literally got up and walked through marked doors to indicate the way they wanted to vote. (These days we have little handheld Blackberry-like devices, which is far less exciting and, as far as I can see, leaves far more opportunities for making a mistake!).

I also remember this day, the day when the first women were ordained. Women who had fought and campaigned and prayed and hoped and dreamed and just... waited. Because there was nothing else to do. Today I honour them for their gracious struggle.

I was 15 on that day, and just beginning to make big decisions about my own future. I wanted to be a speech and language therapist. I had become a Christian 3 years earlier, but I'd never seen a woman in any sort of church leadership role (I'd also never really met a Christian under the age of 50, but that's another story!). I remember the ordinations happening. I watched the coverage on the news. Today social media would have been alive with it all, but then we just waited for the 6 o'clock news to tell us what was happening in the world. I remember being excited, because this was A Good Thing For Women, but of course I couldn't have dreamt of what it would mean for my life. I also don't think I realised the struggle that lay ahead around the issue of women as Bishops.

Fast forward 5 years and I was indeed at Uni training to be a Speech and Language Therapist. I was part of St. George's Church Leeds, and I will forever be grateful to God for leading me there and for all the wonderful people who were such an important part of my journey. Suddenly I began to sense a call to ordained ministry. I was utterly bewildered by it! I couldn't possibly imagine myself as a priest, and yet at the same time I was utterly and completely sure that this was a call of God.

I did all the discernment things that you have to do. I completed my Uni course and qualified as an SLT. I worked for a year (and loved it, and was so sad to give it up). And then I spent a year as a pastoral assistant (an intern before church interns were a thing) at St. George's. I think I hoped I would hate it and be rubbish at it and I could just go quietly back to my normal life. But of course I loved it, and it was just 'right' and all the CofE bods miraculously, inexplicably, said yes. And off I went to college for the most amazing 3 years.

And here I am today. I went to college at 24, was ordained at 27, and started my first incumbency at 30. Now I'm 40, 18 months into my second incumbency, after almost 14 years of ordination. What a joy it has been. What a privilege it continues to be. How grateful I am to God for this calling and this journey.

I couldn't have imagined, at 15, or at 20, or at 24, or 27, or 30, where the CofE would find itself today. These days people rarely express surprise when they meet me. I don't hear as many "I've never met a woman priest before" comments as I used to. But then I've been fortunate to spend all of my ordained life in Liverpool, where they're a welcoming, friendly, hilarious people. I pretty much knew it would be ok when, a whole 3 days into being ordained deacon, I was walking down the road to church, wearing a pink clerical shirt, and someone called out (entirely sincerely) "morning Father!"

Today there are 18 Bishops-who-happen-to-be-women in the CofE (and the best part of that is that I had to google it to check - we're at the glorious stage where there are too many to easily keep count of!). It's slightly baffling that almost all of them seem to be married to male clergy, but that's an interesting conversation for another day...

In this past year alone I have been to the consecration of 2 dear women who are now superb Bishops. I had the joy of preaching at one, and a woman Bishop preached at the other. Gosh if my 15 year old self could have imagined the day when a woman would preach as women were consecrated Bishop!

Many women before me went through unimaginable pain and struggle to get to the point where we now are. I am fortunate to have not had to struggle. I've faced sexism, of course I have, and there have been tough times. As a young woman at a diocesan discernment interview I was asked whether I would be getting married and having children because "they all end up having time off, these women." I've been called a "dolly bird" and people have commented on my hair, my clothes, my make up, my weight, my shoes, my nail varnish. I've had countless men leer at me and say "cor, if all vicars looked like you I'd still go to church." I've experienced plenty of "that's a great point Miss Wharton, now I wonder whether one of the men would like to make it" meetings. I've been referred to as vicaress and priestess, and asked "are you that lady vicar" more times than I can count. But far more than that I've had people tell me how much they have appreciated the ministry of women, and how glad they are to have met women as priests.

For me this isn't about those who, in all conscience, cannot accept my ministry. I recognise their theological viewpoint and I honour and respect it, and hope that they too will honour and respect me and mine (as the vast majority of them do). I believe firmly in their right to hold that viewpoint, and I'm grateful for those I know and love who are doing great ministry.

On Thursday I will lead a seminar (at one of the New Wine Leadership Conferences), along with 2 fabulous women, Lizzy and Nikki, entitled "breaking the glass ceiling" where we'll look at some of the barriers that still exist for women in senior roles within the CofE. I'm excited to do that, and to see so many women around me flourish as they step out into being who God has called them to be. It's a particular joy for me that this seminar will take place in St. George's Leeds.

So today, on this anniversary, I rejoice for the 25 years that have passed and for the incredible kingdom work which has been done and continues to be done by priests-who-happen-to-be-women. I look forward to the day when the word 'woman' never appears before priest, not because we don't exist, but because it is so utterly unremarkable. For now, though, we carry on. We lead services, we preach the word, we baptise, we bury, we marry. We work with children and young people. We visit the sick and dying. We work in the community. We feed the hungry and care for the poor. We climb ladders and  hoover floors and move chairs and make tea. We preside at the holy table. We share the good news. We live our lives. We love Jesus. We go where he sends us.

And I long for the day when this is unremarkable. Because just a few weeks ago I was talking to someone whose church is currently in a vacancy. And they told me of a conversation (with a woman!) who had said "I hope we don't get a woman vicar this time, because you know, we had that woman before, and she wasn't any good." And I want to weep. Because until women vicars are allowed to just sometimes be bad, without it affecting the future of all other women, then we still have some way to go.

Here's a photo of me from my ordination as priest (main observation: being a vicar has given me grey hair!): 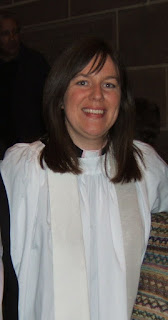