"You'll never know true love until you have a child," people say.

"Of course, as a mother, I can identify so much more with this," people say.

"I have a very real stake in the future of this country," said (mother) Andrea Leadsom, standing to be leader of the Conservative party, thereby implicitly implying that her (childless) rival Theresa May didn't.

“As a mother, it is horrifying to hear the harrowing stories of the children I meet today,” said Samantha Cameron, visiting a Syrian refugee camp.

"If you've got kids you'll understand," say Calpol in their advert.

Politicians and celebrities respond to tragedies with words they intend to be comforting, but actually exclude so many "as a parent, I am so upset by this news..."

I was watching 'This Way Up' recently (Channel 4, it's great, watch it!). There's a couple in it who are sort of almost-engaged, and both families are together for a big birthday do, and the guy's mum starts asking about when they're going to have children. It's all horribly awkward, and doesn't get any better when the woman announces she doesn't want children! But in the middle of it all her prospective mother-in-law announces that you can only really know love when you have a child. The character, Shona, objects to this, saying that of course she understands what love is. But it's clear no one really believes her.

On Twitter recently, I commented on a fairly sexist and ill-informed thing someone had written, and someone else replied saying "Bet he'd feel different if he had a daughter or two." My response was: "He shouldn't have to though, really. I understand that men are people without having any sons!" (By the way I mean no criticism of the person who wrote the first comment).

I googled "as a mother" and "as a father" to write this blog. One quote I came upon was from Michelle Obama. "Oh no," I thought, "not her too!" (I LOVE Mrs Obama). But wait. Although the headline read "as a mom..." when I read the full quote it said this: "It’s up to us, as mothers and mother-figures, to give the girls in our lives the kind of support that keeps their flame lit and lifts up their voices."

Can you spot the difference? "Mother-figures." God bless you Michelle! I can be a mother figure, for sure. I hope that's how my friends kids see me, how the kids at church see me. Aunty Kate, the extra adult, who's fun and silly and occasionally, from time to time, now and then, maybe even a little bit wise, and who you can talk to about Stuff and who has time to listen and will always be there. I have never given birth, and I never will. But I know love. I know grief. I know pain. I know hope. I know joy. These emotions aren't the preserve of those who have carried and birthed children. How could they be?

This year at New Wine United I heard a lot of really superb talks. Up there among my favourites were the brilliant morning Bible teaching sessions from Lucy Peppiatt, Principal of Westminster Theological College. One morning Lucy was talking about the call which is upon all of us to be spiritual parents. Each of us needs someone ahead of us, further down the road, who we can lean on and ask for help and look to for guidance. And each of us too needs to be that person for someone who's coming along behind. And what I totally loved about what Lucy said was that she talked about being a spiritual parent, and what it looked like, and how we could get better at it. And then, totally naturally, not as an awkward afterthought, not when she suddenly caught herself, but just brilliantly, in the mix, as one of her points, she said that anyone can be a spiritual parent, It doesn't matter whether or not you're married. It doesn't matter whether or not you have your own children. It doesn't matter whether or not you've known good parenting in your own life. This is something we can ALL do. So simple. But so freeing and wonderful to hear and remember. I could have cried! I thanked her for saying it, because so often it goes unsaid.

I've read a bit about this phrase lately. I think people are sort of just about beginning to cotton on to the fact that it's really very unhelpful! About time...!

The thing is, let's just think about it for a moment. Do we really want to say that someone who has never parented a child is incapable of unconditional love? Of empathising with a parent who has lost a child? Of caring when a child is harmed? Of being angry with those who do the harm?

(And, while we're at it, let's not pretend that the simple act of being a parent necessarily means that someone does have love, empathy, or any other positive quality. Newsflash: some people are parents, and also not very nice).

Let's be clear, we are horrified by the conditions of children in Syrian refugee camps because we are human. Because we are decent people.

There are some things I will never know about because I haven't carried or given birth to a child, obviously. You don't need me to list them! There are quite a number that I can happily live without! But let's not suggest that love is among those things that I haven't experienced. That suggestions diminishes me. It diminishes us all.

To end: a daft photo of a rather lovely teddy-rabbit, belonging to one of my Godchildren, that she left in my room recently when I went to stay, so that I would have some company.😍 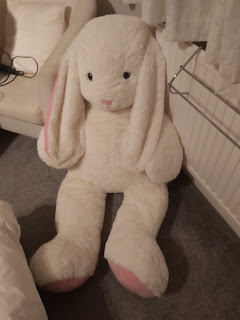