What if my support bubble bursts?

I am finding lockdown seriously tough. That's a huge understatement, and it's probably also a statement of the extremely obvious - certainly I know far more people struggling than loving it. There are ups and downs, of course, but in general this is really not fun. And I'm not even shielding (bless you all...). (I do recognise, of course, that my extremely, literally-off-the-scale extraversion may have something to do with my experience of lockdown).

Everything is different, everything is strange. None of us are doing the things that we thought we would be doing right now. Our diaries have been consigned to history. We have no idea what next week, next month, or next year will look like.

I've almost blogged so many times over the past few weeks. Instead, I've written a few long and rambling social media posts. Bless you if you've engaged with them in any way. Bless you particularly if you're married and you've resisted the urge to comment with "if I were single, this is what I would do..."

So many new words and phrases have been added to our vocabularies during this time, or at least, words we thought we knew have suddenly begun to mean something different. This weekend, we're all about the word 'bubble.' I have written and spoken the word 'bubble' more time than probably in the whole of my life up to this point. I've got to the point where I don't even know whether bubble is a noun or a verb.

Anyway, it's this bubble business that has finally prompted me to blog. I've already written a super long social media post about it, but these are some of my thoughts after a bit more time to think about it all.

I actually missed the announcement about it. I missed it specifically because I was talking on the phone at the time, but I would have missed it anyway because I've decided it's better for my mental health not to watch the daily briefings. As I finished the phone call, I noticed multiple notifications on my phone - numerous people had texted and messaged me and every message contained the word 'bubble.' I quickly caught up with the news, and it was immediately apparent to me that I had A Lot Of Thoughts about the whole thing. I had to eat tea and do a Zoom meeting, and then I posted a very unprocessed stream of thoughts.

It wasn't a surprise, in some ways. I had seen several hints over the past few weeks that we would get to the point where these bubbles would come into play. I'd had concerns from the start about what this would look like for single people. Admittedly, I didn't see the story twist coming - I thought the bubbles would just be between 2 different households, and I worried that would disadvantage single people, because families with kids would probably choose other families with kids to bubble with. But this was different - these bubbles were being presented specifically to benefit single people. That's a good thing, right?

To be fair, for some people, it is indeed a good thing. I have heard from numerous friends for whom this is a wonderful, joyous development. Finally, they can see those family members, those friends, who they have been desperate to see. They can touch another human being. They can spend time inside someone else's house. For some, it has been a straightforward process to work out what their bubble should look like. I am truly delighted for those people. I wish them all joy.

For others, though, it's fraught with difficulties. Some are facing huge dilemmas. Some people have no one at all with whom to form a bubble. Others are faced with what feels like an impossible choice - to choose *them*, or *them* - either way, someone loses, and someone is upset. Some feel pressured to make a choice they don't want to. I have heard from so many people for whom this is extremely painful.

And if you're not single, you're left out. No bubbles for you! Families, friends, siblings who can't meet because there are couples and groups involved and this particular innovation is only for single people.

Even as I write this, I imagine you all saying "honestly Kate, you're always saying that single people are left out and overlooked. Here's a plan that is specifically designed to benefit single people and you're still complaining!" I'm sorry... apparently I can't help it.

The thing is, there's so much about this that just doesn't sit well with me. I'm uncomfortable with the phrase 'support bubble,' implying that only single people (in contrast to anyone else) need support. There's something patronising about it, something of the "oh bless those poor dear singles." Also, many of the headlines I've seen about this have talked about grandparents being reunited with grandchildren, but that only works for single grandparents (and are only grandparent-age people single?)

It's a special sort of prejudice which simultaneously assumes that everyone in a certain category is elderly and lonely, and also that they have not yet grown up and learnt to function independently. Singles are cast here into the passive role - we must be invited into someone's bubble. The grown ups are out there, living their family lives, and if they wish, they can invite a single person to join them.

It feels a little bit like no one who is in charge of any of these policy decisions has ever met a normally functioning, adult single person, with multiple friendships, and with gifts to offer all of their own.

I haven't touched another person for 91 days. This theoretically gives me the opportunity to change that, but it's almost too overwhelming to contemplate. How on earth do I make this choice? When I wrote my social media post about this I likened it to being the last person chosen for the team in PE, and so many people got in touch saying they identified with this feeling. What if I'm the one left to last?

One of the most difficult things about being single as an adult is knowing that I am no one's 'most important person.' When people have spouses, and/or children, it is those people who take the number one spot in their lives. They would choose them first, of course. But who would choose me first? (Don't get out your tiny violins, it's fine, it is what it is, but we may as well be realistic).

This is nerve wracking in so many different ways. For a start, we have no idea what the next step is in the roadmap (*is* there a roadmap...?!) I'm nervous about joining a bubble and then finding, as the next step unfolds, that I have forced my friends to be stuck with me when they now have the chance to extend their bubble further. I guess ultimately we must take a leap of faith, a brave step into the unknown. Everything at this point is unknown.

Some people will choose to remain bubble-less because it's all too scary. Some will remain bubble-less by default, because they have no options. Some will pick a bubble and hope for the best. It's scary. Maybe the word bubble does work in this context after all, because bubbles are beautiful, and they're fragile. They float for a moment, and shine, and let in the light. But after a while they pop. Dare I take the risk?

Here's a picture that has meant a lot to me during lockdown. It's by the splendid Charlie Mackesy (if you haven't read The Boy, The Mole, The Fox and The Horse, you simply must). 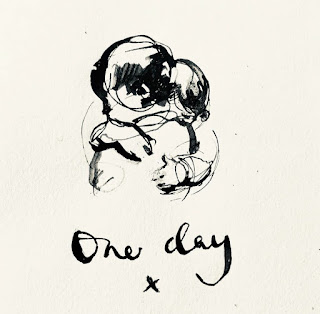