Some thoughts about mothering... and daffodils...

Hmm. Even as I begin this post it's with some trepidation. Is it a good idea to explore the area of mothering, two days after Mothering Sunday (which is of course what has prompted these reflections?) Will I offend or upset someone? Will I get myself in a tizz? Well, I hope not, but there are so many thoughts flying around my head that I really need to just get them out there!

Before the serious stuff begins though, I have to confess that the reason I've used the word 'mothering' in the title and in the first paragraph is because I'm still not 100% sure where the apostrophe is meant to go in 'Mothers Day'. The pedant in me (which is really just all of me) wants to put it after the 's' of course - surely it's a day for all mothers, not just one? But many websites inform me that it should be before the 's' as the idea is that, for each individual, it really is a day just for their own mother. But is that just in America? I have no idea. I shall stick with Mothering Sunday!

And before I really let rip with my musings, a caveat is required. I've blogged before (http://katewharton.blogspot.co.uk/2014/01/probably-my-least-favourite-phrase-in.html) about how I can't stand the phrase "I know exactly how you feel" and yet there's a risk in what I'm writing today that some people will think I'm saying just that. I assure you that I'm not. I'm simply sharing how this issue feels for me, at this moment. I'm about to turn 36, I'm single, and likely to stay that way, and I don't have kids. I'm going to say a bit about how that feels for me. I obviously have no idea how it feels for any other single person.

I also very clearly have no idea how this issue feels for people who are married but for whatever reason can't or don't have children. I have some good friends in that position and I weep for some of the terrible things that 'well meaning' people have said to them. I have no idea what it must feel like to be them.

So, all scenes set and all caveats laid out, here goes...

When I was a little girl, I was quite certain that when I grew up I would get married and have children. It was just obvious - why wouldn't I? I had no concept that for some people this just wasn't the way life worked out. I was an only child and I'd always longed for a sister - I pestered my poor parents to death about it! I was very clear that I wanted to have 3 daughters, and at any given point I could have told you what their names would be (though they often changed!).

Anyway, time passed, and I didn't get married, and I didn't have children. And now I'm nearly 36. Which, while not yet 'too late', is nevertheless close enough to focus the mind somewhat. And anyway over the last few years a lot of things have changed for me in terms of how I think about my own singleness, and some of the choices I've made for the future (you can read more about that in Chapter 7 of Single Minded). Suffice it to say though, that in as much as I can be sure of anything, I don't think I will get married, and I don't think I will have children.

When I tell people that (actually it's generally when I tell other single people) they say something along the lines of "oh aren't you lucky that God has taken away your desire to get married and have children". Now I have to tell you that he hasn't done anything of the sort! For all sorts of reasons, that I won't go into in this post, I think that's where I currently am. But it doesn't mean that I don't sometimes wish things might have been different, and wonder what my life might have been like if it had worked out the way I expected it to when I was a little girl.

I love children - I mean I really am completely daft about them. I love cooing over tiny babies, and munching and scrunching their chubby little cheeks. I love playing silly games and doing silly dances with toddlers. I love the wonderful conversations you can have with little kids - one minute totally serious, the next fabulously daft, the next utterly surreal. I love the way kids look at the world, full of wonder and joy and exuberance. I love how much things matter to them. I love how independent and feisty and funny and playful and boisterous they can be. Not everyone does love kids. Even some people who have kids only love their own, not other people's!

I'm good with kids, too, really good. I get them, I can talk to them, I can play with them, and they like me. Not everyone's good with kids, and certainly not all vicars - that much was obvious at college! I love toddler groups and school assemblies and kids' church. I love messy crafts and sing songs and story time.

I love my friends' kids. I have 3 Godchildren and being part of their lives (and their siblings') is one of the greatest joys and privileges of my life. I love watching them grow up. I love spending time with them. I love putting them to bed and reading stories and playing games and doing the school pick up and wiping away tears and changing nappies and having hugs. I love being given hand made cards and pictures and letters.

I also love spending time with other friends' kids who are older, and who (hopefully!) see me as a friendly-and-wise-but-non-parental adult they can talk to.

Sometimes, spending so much time around kids, and knowing I won't have my own, really, really hurts. And it's getting harder. (It's probably hormones - goodness knows what will happen when I turn 40!). Sometimes it seems as though it actually, physically hurts. I can be reduced to tears by something cute a child says, or by a hug. "I love you Aunty Kate" gets me every time, obviously! The other day I burst into tears in the supermarket watching a wide eyed little boy choose a toy with his pocket money. It was the sense of excitement mixed with concentration, the choice of that toy being the most important thing in the world to him at that moment...

So I'm an emotional wreck sometimes (if you know me well you're now saying "tell us something we don't know"!), but there are good moments too. What joy I have knowing so many amazing small people, and being part of their lives. What a privilege to know that I will always be a part of their lives. (I don't have siblings, so no nieces and nephews - so I tell my Godchildren they'll have to care for me in my dotage as well as their parents!).

Don't worry though, I'm not always an emotional wreck - sometimes it's just lots of fun, and then I go home and leave their parents to do the messy, boring stuff. I'm not stupid!!

It might be less painful if I engaged less with kids. Maybe that's what some people choose to do. If I didn't babysit, or join family teatimes and bathtimes, or help with the toddler group. Maybe then I'd be reminded less often of what I don't have. But I don't want to do that, because then I'd miss out on so much. I think maybe the kids would miss out too.

Mothering Sunday can be a tough day for lots of people for lots of reasons, I know that. I'm well aware that what I'm describing here is only one of those reasons. In my church we don't give out daffodils to mums on Mothering Sunday. Instead we do 'something' else - maybe we give everyone chocolates, or we all make something, or there are flowers, but they're for everyone to take if they want them. We try to affirm mums but to be sensitive to anyone who's finding it tough. I know lots of places do the daffodil thing really well but I've never quite got over one year (in a different church) when all the kids had given daffodils to their mums, and sat back down. One mum looked over at me, poked her daughter, and said in a stage whisper "get some for Kate, she hasn't got anyone to give her any." I could have wept, though of course I accepted them with thanks.

Maybe you think I was being unreasonable or over sensitive. Actually I don't mind at all if all the mums get given daffodils, or if all the women get daffodils. And I do love getting flowers! But I don't want pity daffodils, "oh dear she's all sad and alone we'd better give her some" daffodils. I'm sure lots of people feel differently, but there we are.

So that's what I've been reflecting on this Mothering Sunday. I'm so, so glad I get to 'mother' in a small way, as a Godmother. I pray for myself, that I'll stay soft-hearted around kids (even if it means I cry a lot!). I pray for others for whom this is tough. I thank God for the joy of small people. I thank Jesus that he understands. I might go and buy myself some daffodils...

Here's a picture one of my lovely Goddaughters drew of me. What's not to love?! 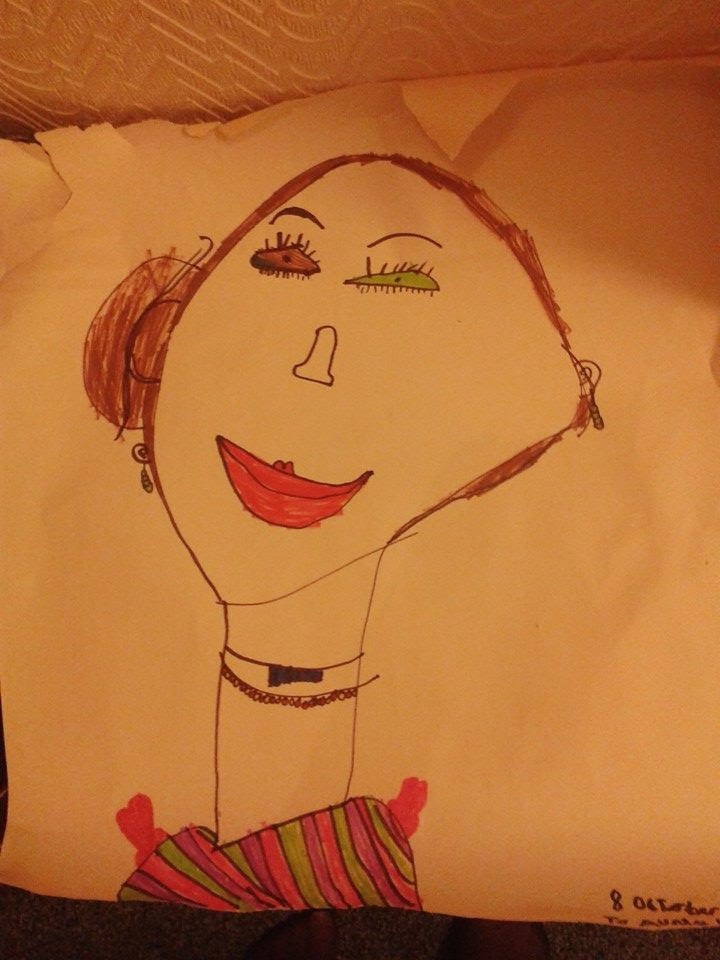